As a young man who tested positive for HIV in 1987 at the age of 21, Robert Gillum never saw his condition as a death sentence.

“My health probably had more to do with my spiritual life than anything else I did,” says Gillum, now 54 and living in Virginia. “Right from the start I never thought that I would get sick with HIV. I believed I was healed and that’s how I lived. “

Gillum, who grew up in the Baptist Church, credits his belief with staying healthy in the early days of the HIV epidemic. After watching people who took early HIV medication get sick, he waived treatment until 1999.

Gillum managed to keep his health intact during these years. He insisted that his doctors check his CD4 T cell count and not tell him the number but make suggestions about what to do about treatment. He would then decide whether to start taking medication.

Today Gillum is no longer detectable. Like many other long-term survivors, he is aging and living healthy with HIV on his own terms.

He was always in tune with his body. When Gillum gained over 20 pounds, he suspected that the HIV drug he was taking was to blame. As a result, he and his doctor worked together to change his treatment. He is currently taking a new single tablet that has not caused weight gain or other side effects so far.

To lose weight, Gillum trains three times a week. In addition to cardio, he trains his arms and legs. “When I’m in the gym, this time becomes more surreal for me,” says Gillum. “I’m not just trying to stay physically healthy. It’s also mental, emotional, and spiritual. “

They also drink more water and eat more vegetables and fruits to keep themselves healthier overall, especially than someone aging with HIV.

“Nobody really looked at how long you would live with HIV,” he says. “We weren’t worried about the long-term things, but now we are.”

Aside from HIV, Gillum is worried about his cholesterol. To keep this in check, he has reduced the amount of cheese, butter, and fried foods in his diet. He starts his morning with oatmeal and eats more baked meals.

Gillum understands that living healthy with HIV includes keeping your doctor’s appointments. “A lot of people don’t see doctors often,” he explains. “I still go every three months. I just like being on top of my health. “

Most importantly, Gillum is committed to his health and encourages others to do the same. He has an honest and open relationship with his doctor about what is happening in his life and health.

He is also an advocate of mental health therapy because it changed his life. “The therapy has helped me stay emotionally and mentally healthy for the past 28 years,” he says.

“Don’t let HIV define you,” he says. “Live your life. HIV is just another virus. You can live and not let it dictate what you can be and what you can achieve. I’ve done a lot of things that I never would have thought would.” would happen when I tested positive in 1987. “

At the age of 68, Pat Migliore remembers what it was like to stay alive after taking an HIV positive test in 1986.

“There was clearly nothing that could be taken to stop HIV,” says Migliore, who lives in Seattle. “It was before AZT [azidothymidine] When I found out I had HIV. The mindset was pretty much that I was going to die. “

Though Migliore thought she might live a year or two, she found solace in support groups for people living with HIV. At the time, she relied on alternative drugs to survive.

“We were at a point where we would try almost anything,” she says. “And even though I was depressed and pretty exhausted, I tried very hard to stay positive and not always look at the worst-case scenario.”

Although Migliore has lived with AIDS since 1991, she currently has an undetectable viral load that she attributes to good adherence to her HIV regime.

“Sometimes when I get sick – which luckily I don’t do very often – I have to try to find out whether it’s HIV or old age,” says Migliore. “Because now it’s just not HIV. At 68, some parts wear out.

While Migliores medications keep you healthy, living healthy with HIV requires more than adhering to treatment. It is also about a person’s overall physical and mental health.

Migliore regularly goes for walks and stretches. She drinks a lot of water and eats pretty healthy. She can’t remember the last time she ate fast food. “I tend to cook for myself,” she says. “I don’t eat a lot of red meat. I am a salad fan. “

Migliore visits her HIV doctor at least once a year and does lab work every six to 12 months. If health problems arise, such as frequent seizures with bronchitis and pneumonia, she visits the doctor immediately.

As a woman aging with HIV, she sees her gynecologist regularly for routine checkups like Pap smears and mammograms.

Migliore found that facilitating and participating in support groups for women living with HIV made their lives better. Her relationship, her dog, and her attachment to the HIV community all help make her feel good spiritually.

“It was pretty difficult last year because I’m an extrovert,” says Migliore, referring to the current COVID-19 crisis in the US. “The happiness of being in a relationship has a lot to do with my current physical and mental health.” 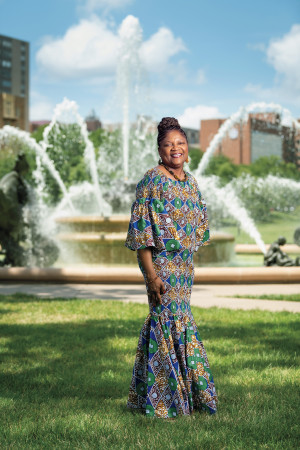 That year, LaTrischa Miles was diagnosed with HIV 26 years ago. In 1995 Miles never thought she would be alive today.

“I had no idea how long I would live because I didn’t know about HIV,” says Miles, 61 and residing in Olathe, Kansas. “All I knew about HIV was about death and dying.”

Miles was determined to stay alive for their three young children. Fast forward to the present, and she’s a grandmother and long-term survivor with an undetectable viral load.

“I managed to stay healthy by taking my medication and taking care of maintenance,” she explains. “I kept my doctor’s appointments and learned as much as I could about HIV.”

In addition to HIV, Miles has diabetes, a liver hemangioma – an abnormal collection of blood vessels – and osteopenia, a condition in which a person’s bones are weaker than normal but not weak enough to be considered osteoporosis.

But it’s not just her HIV doctor she sees regularly. She also sees her family doctor, an endocrinologist, a gynecologist, an optician, and other health care providers.

“Unlike most populations, our visits to the doctor who live with HIV are not annual visits,” she says. “We have a number of appointments where we need to be comfortable with our doctors because we will see them at least a couple of times a year.”

Miles learned how to read her labs so she can communicate and collaborate effectively with her doctor, and prepares for visits to her HIV doctor by writing down questions. “It’s about what works for me and my lifestyle,” she says.

She encourages people living with HIV to learn more about the virus so that they can become their best lawyer.

“I feel like I took the lemons I was given and made lemonade,” says Miles. “I let my years count. I am a leader and advocate for the HIV community. I love working with women who are living with HIV. The trip was amazing. “

Residing wholesome in Leonardtown is straightforward